skip to main | skip to sidebar

The latest step in my constant journey for self-improvement has been a difficult one. A step that requires a strong mindset, consistent good night's sleep and a dash of pure insanity.

I've given up caffeine entirely.

I feel that sentence deserved to stand alone. It may be poor timing considering Starbucks recently brought back my favorite Pumpkin Spice Latte. Damn you, Starbucks! 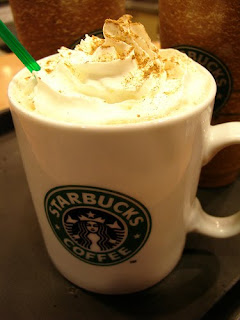 Whew, now on to the dets (as I fight off the urge to lick my computer monitor). I'm on day three of caffeine-free living, although I phased Coke out of my life (for the most part) about a year ago. But, in my mind, coffee stands alone, miles above all others. Jack with my morning coffee and someone's going to pay. That's not exactly a healthy mindset. I don't like feeling as if I have a substance dependency. And, I don't like feeling that I don't come alive until I've had my Joe. So, three days ago, Joe and I officially ended our relationship.

To ease the transition, I've allowed myself a cup of decaf in the morning. It looks the same, smells the same, but it's just not the same. I drink it anyway.

There's been a heavy dose of side-effects to accompany this decision. Monday at around 10, I felt as if I was going to pass out. Clammy. Head pounding. Desperate for a fix. This only reiterated my decision. By 2 p.m., I was pretty sure I was going to have to go home ... but I can't drive back to Shreveport like this ... might as well work through the pain. Tuesday, I experienced a similar pain, however far less intense. And today, I felt like I was sleepwalking through the morning. I said out loud to myself numerous times, "focus, focus."

The good news is that the headaches are becoming milder and milder. I think I'm coming out of that stage of detox where you're sweating and puking and hot and cold at the same time (these were not my actual symptoms).

You may all be asking one question at this point. Why? Essentially, I'm not getting any younger folks! Might as well kick the bad habits while I still can.

Posted by Stephanie Jordan at 12:56 PM 8 comments Links to this post

This weekend we drove up to Fayetteville to meet this adorable little girl. 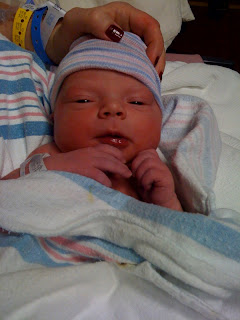 Everyone, meet Miss Ruby Belle Smith. I've seen a lot of pretty babies, but this one takes the cake. Perhaps, I'm slightly biased. She has perfectly olive-colored skin and the sweetest face that melts your heart. Ty and I loved every minute we had with her and her parents. Ruby, being only days old, spends most of her time sleeping. Even that is fun to watch. She chirps and smiles and twitches in her sleep and it's all too adorable.

It was a long drive and a short visit, but it was completely worth it just so Ty could do this: 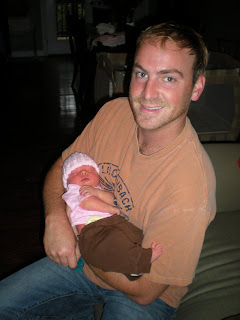 I know Ty's going to be a great uncle! And even more so, I know Justin and Mandy are going to be super parents.

Posted by Stephanie Jordan at 12:41 PM 3 comments Links to this post

To think, I had become such a consistent blogger and now this. Sorry guys, I find that in my day there is rarely a spare minute. Today, you just so happen to be in luck because my feet hurt so I decided to sit down and eat lunch. So with a sandwich in one hand, I'll update you guys as to what's been going on in my life.

This past weekend, Ty and I traveled to Guy, Ark., for our friend Tuck's wedding. If you've heard of Guy, then you are a far more sophisticated traveler than myself. It's what some people reference as "the sticks." The wedding was set to take place between the barn and the shed in Megan's (the bride) backyard. A country wedding couldn't be more fitting for these two rodeo riders, however nearby accommodations means a 45 minute drive to "town." Instead of driving all the way back to town after the wedding, Ty and I opted to do this. 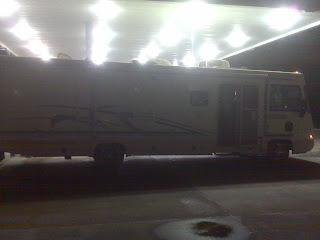 That's right, we spent the weekend in an RV! I know the pictures arent' the greatest, but my Blackberry was my only option once I discovered my camera battery was dead. We parked it in the pasture right next to Megan's house. So as I mentioned before, the wedding was casual, country style. Cowboy boots, a country band playing on a flatbed trailer and homemade preserves for guests to take with them after the reception. Ty, not so much of a cowboy, was a groomsman and uniformed in a black cowboy hat, white shirt, black jacket and Wranglers. I thought he looked like J.R. from "Dallas," but see for yourself. 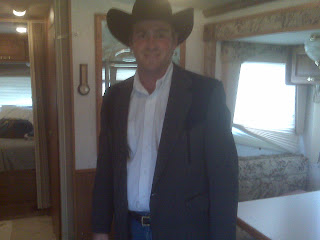 We also decided to take Lacy, Ty's lab, with us on the trip. She loved most of the ride, but after a while you could tell she was road weary. 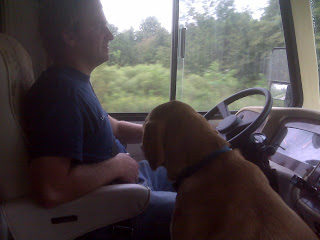 We're headed back to Arkansas this weekend (RV not included). Ty's sister, Mandy, who lives in Fayetteville, is having her baby today! We're so excited to meet Ty's little neice and I'm sure plenty of pictures will follow. We can't wait to meet you, Ruby Belle!

Posted by Stephanie Jordan at 1:12 PM 2 comments Links to this post

Hello Blogger friends, I've missed you greatly. I started a new job last Monday, which has brought on many adjustments and forced me to neglect you temporarily. I can't believe it but I've stepped away from journalism and entered the marketing world. I joined a company called Fibrebond in Minden. It's a manufacturing company best know for making concrete buildings at the foot of cell phone towers, but they also construct schools and prisons. After a full week on the job, I don't regret the decision one bit. So, let me tell you about the new things going on.

Instead of waking up at 7:20 and driving 10 minutes down the road to get to work, I'm now up at 5:45 and leaving the house around 7:15 to make it to Minden by 8. It's not so bad once my feet hit the floor. But with it still being completely dark outside, my body is being somewhat hard-headed with this transition. It's a stark contrast from my life two years ago, when I could stroll in to work around 10 a.m. because I was an entertainment reporter and most entertainers are not morning people either. It was a lovely match. To ease the adjustment, the coffee pot now wakes up before me. I can handle the early morning much better with a cup of joe in hand.

The people here are SO nice. It's nice to go to work and not feel like you're walking onto a battlefield. In the past year, I would have to say that's one thing I've missed very much. At The Times, we were a family. We were all in it together, working to put out the daily. It was a place where respect and ethics were never in jeopardy. In the year since I left that job, I've felt alone professionally. It was a daily fight for what I believed in and a battle I know I could never win. I've learned that your work atmosphere can impact you severely, so I was relieved when I pulled up to the guardhouse at Fibrebond my first day. The guard greeted me with, "Good morning, Stephanie. Welcome to your first day at Fibrebond." He already knew my name? Are the people here really THAT nice? And as a matter of fact, they are. Everyone says "hello." And while it's a large company, it has a very down-home feel. Not to mention, in each of the kitchens there's a pot of coffee, a pitcher of tea and whatever fresh-baked goodies have been brought in that day. I'm avoiding the goodies, but it's such a polite, Southern gesture. Oh, and most importantly, jeans are welcome any day of the week.

In my entire career, my desk has never been a place for finer things. At The Times, I shared a long table-like work space with several other people. Good thing those people were absolutely wonderful. Kathie Rowell, Maggie Martin, Donecia Pea, Adam Causey, Alexandyr Kent. Great people to be in close proximity to each day. I upgraded to my own office last year. I was appreciative, however the space was rather cozy. I couldn't open my filing cabinet without first moving my desk chair. And because the building was located in a valley, there were no windows ... in the entire office. At Fibrebond, I'm working in the executive offices. Windows everywhere, L-shaped sturdy wood desks, gorgeous landscaping and even hummingbirds that buzz by my window occasionally. These are definitely the best accommodations I've had yet.

I say all of this to let you know that so far things are good. Change always tends to make me a little nervous. But this was a calculated risk. And when the conditions are right, change can be very good.

Posted by Stephanie Jordan at 11:41 AM 7 comments Links to this post

Stephanie Jordan
I'm a former journalist turned marketer of concrete. I still type a lot. Other than that, I'm married to an oilman, the owner of a mini-schnauzer named Baxter and a lab named Lacy, chef to anyone with an appetite and a connoisseur of $10 wines. 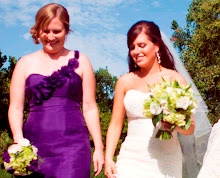 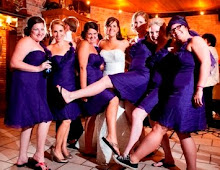